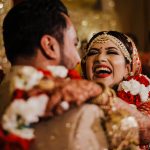 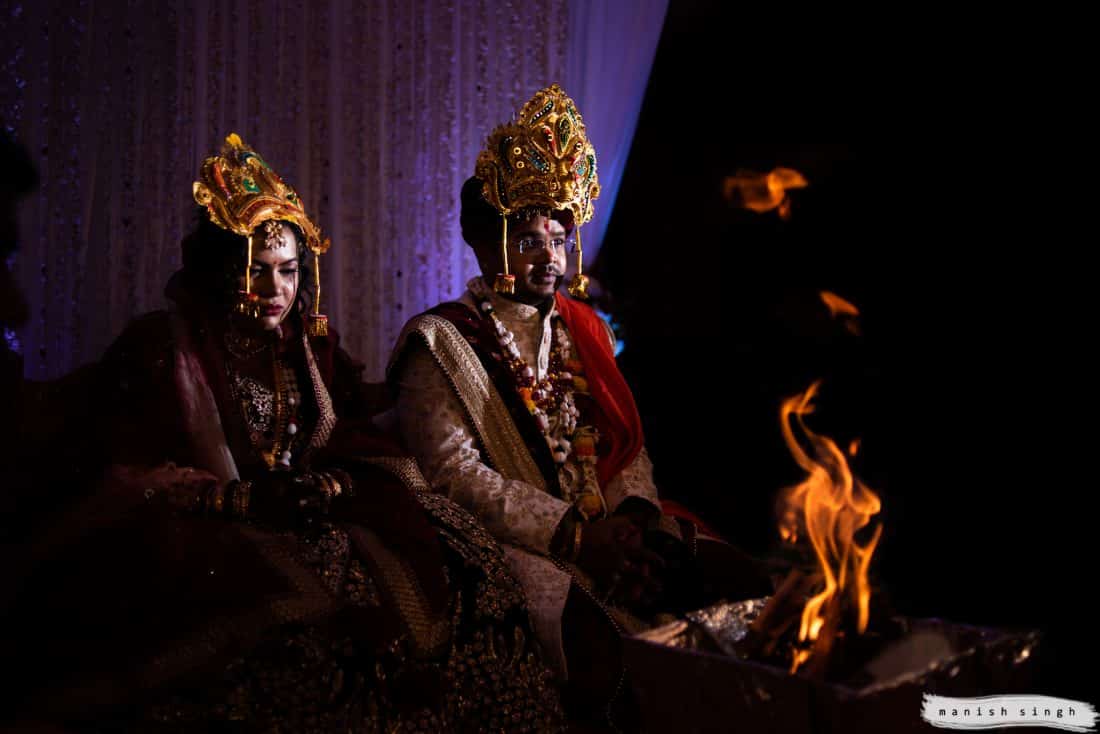 As per Hindu beliefs, marriages are something that is made in heaven and when you get married, the bond lasts for seven lifetimes. Moreover, it is regarded to be a major turning point in the life of an individual as he/she enters the second vital ashram or stage of his/her life – the ‘Garhasthyaashram’.  In Hinduism, a load of significance is related to marriages since it is believed to be one of the most major duties of anyone’s life. Let you know that Hindu weddings are pretty long procedures with numerous rituals, which might take several days to be performed. Every practice and custom in a wedding has deep spiritual and philosophical importance. Hindus prefer adhering to these sets of customs, which is quite unique.

Variations in Hindu Marriages across India:

In India, weddings amongst Hindus are a set of rituals and differ considerably from one region to another. Each community has its own spin on the elementary Hindu marriage based on cultural influences and geographical location. While in some sections of the society, it is a simple yet elegant business, in others, weddings spell pomp and grandeur. In the northern part of India, the proceedings of the wedding are usually termed as Vivah Sanskar while in the southern part of India, it is known as Kalyanam. Basically, Hindu weddings are a Yajna ritual along with the Agni or Fire Deity as the main witness. Primarily the rituals are handled, as well as carried out with Sanskrit mantras, as per instructions laid down hundreds of years ago by elders. In some cultures, wedding ceremonies happen during the daytime whereas, in others, they take place after sunset only. The majority of the north Indian wedding ceremonies are huge on colors, fun, and frolic while south Indian weddings are comparatively modest and demure.

Though there are unlimited variations across India whenever it comes to wedding customs and rituals. However, amongst most Hindu communities, marriages are extravagant events with manifold rituals being observed several days. The most common theme of different versions is the enthusiasm and dedication together with an inclination toward adherence and devotion to traditions. Moreover, the involvement of extended friends and family is a must in Hindu wedding ceremonies. There are certain pre-wedding, post-wedding, and of course, wedding day rituals, which are observed by Hindus.

Whether you are attending a wedding ceremony as a family member, as a guest, there are some of the Hindu wedding traditions and rituals you can hope to see.

The Date of the Wedding is Fixed in the Stars:

The ‘muhurta’ or an auspicious time is determined for the event before the wedding. Using the date of birth of both the bride and groom, astrologists calculate the positions of stars and planets to reflect the heavenly union of the couple. Bride’s and groom’s ‘gautras’ are announced during the ceremony. A ‘gautra’ is nothing but the ancestral lineage or the original clan of the ancestor. In Hindu law, marriage should never occur within the same ‘gautra’.

It is all about applying Mehendi or Henna to the hands and feet of the bride (in some regions it is applied to the groom too). This wonderful ritual happens generally in the evening amid a load of music and dancing by the friends and family members. While the bride needs to sit for long hours to have the mehendi done. The blissful celebration is oftentimes seen as its counterpart with the singing of old, traditional songs and playing of musical instruments such as Dholak. 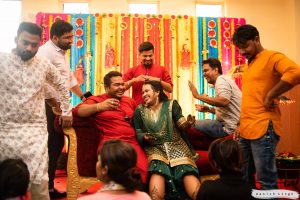 Before the wedding ceremony, there is a pre-party known as Sangeet, organized where family members join together to dance, sing, and celebrate the joy and delight of the upcoming union. The best part is that the members of both the bride’s and groom’s family give performances. The family of the bride sings traditional folk songs to the groom’s family in order to welcome them all.

The Bride and Groom Wed right under a Mandap:

In a Hindu wedding, the entire wedding takes place under a mandap. Well, the wedding mandap is just a temporary structure built for the wedding purpose. It might look like an elevated platform, which is adorned with anything from crystals and fabric to greenery and flowers.

In the Mid of the Mandap, a Fire Burns:

A fire is being kindled in the mid of the mandap. You must know that a Hindu wedding is a sacrament and not any contract. And to signify the practicality of the ceremony, a fire is being kept as a witness. There, offerings are made by the couple. The brother of the bride gives three handfuls of puffed rice to his sister as a wish for the happy marriage of his sister. The bride offers the puffed rice to the fire each time for the safety and well being of her husband.This offering is called Lajja-Hom. 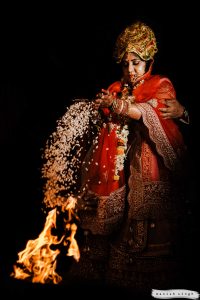 During Jai Mala the Bride and Groom Exchange their Floral Garlands:

This is a part of the wedding when the couple exchanges their floral garlands and this signifies the yearning of the couple to get married to each other. 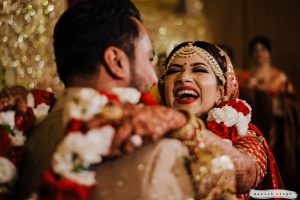 The Bride’s Father Pours Water through his Daughter’s Hand when he Gives his Daughter Away:

When the Couple Circle the Holy Fire, their Clothes are Tied Together:

In the Northern part of India, the Saptapadi is a vital ritual in wedding ceremonies. During this part of the ceremony, the couple gets their clothes tied together. While in the southern part of India, the bride and groom walk seven steps together as this signifies their friendship and bonding. But in North Indian weddings, they walk seven times around the ceremonial fire and each round suggests a particular blessing that they request to the almighty. The main importance of Saptapadi is to make a friendship that is the base of a Hindu marriage.

Vermillion is Applied to the Hair of the Bride; Implying She is Married now:

Sindoor or Vermillion is applied to the part of a bride’s hair as it signifies her new position as a married woman. From that day onwards, the woman wears it regularly as it is believed that Sindoor protects her husband from all the bad things.The ritual is called ‘Sindoor-Daan’. 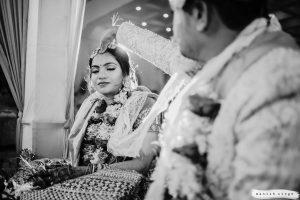 A Red Saree is Worn by the Bride:

The outfits of the bride need to be red in color. In Hindu marriage, red signifies fertility, prosperity, and affluence.

The wedding ceremony starts with Ganesh Pujan, the god of good fortune and beginnings and the remover of problems. Salutations are being offered so Ganesha might pave the way for the conjugal life of the couple.

Cords are Secured to the Wrists of the Couple:

Cords are knotted to the wrists of the couple. Marriage is believed to be a difficult phase in life and these cords provide them with the needed protection and safety.

The Groom Beautifies the Bride with Mangal Sutra, a Black Bead Necklace:

The groom places Mangal Sutra on his bride. It is believed that Lakshmi, the goddess of prosperity, wealth, and fortune, is invoked in the necklace and the bride gets blessings throughout her marriage.

Now comes the post-wedding customs and it mainly includes Vidaai, the warm welcome of the bride at his groom’s place, and of course, reception. Mainly during the Vidaai, the bride’s family members give her an emotional farewell and then over her shoulders, the bride throws three fistfuls of rice along with coin as this signifies that she is paying all the debt to her parents for nurturing her well.

Once she arrives at the groom’s place, the new married couple is wholeheartedly welcomed by the mother of the groom with an aarti. After that, the bride enters her new house by displacing a rice container suggesting that she is the supplier of abundance and wealth to her new family. Then she places her fit in a red vermillion mixture and enters the house, leaving her footprints behind. This particular ritual is observed since the bride is believed as a form of Deity Laxmi. Then a several games related to the wedding are played in order to make the new bride comfortable.

The next day, reception is arranged by the groom’s family. This specific event has no compulsory rituals to be practiced, in fact, the reception comes packed with music, dancing, and a grand feast.

Apart from these rituals, many other rituals and rites are there that are followed and practiced in Hindu Weddings. Some of them are Sagan/Tilak ceremony, dwar rokai, mooh dikhai, and pag phera ceremony, to name a few.

So, if you want to explore the rich culture and traditions of the Hindu Wedding ceremony, then you should attend one this year.

Do check the Odia and Bengali wedding rituals as well. 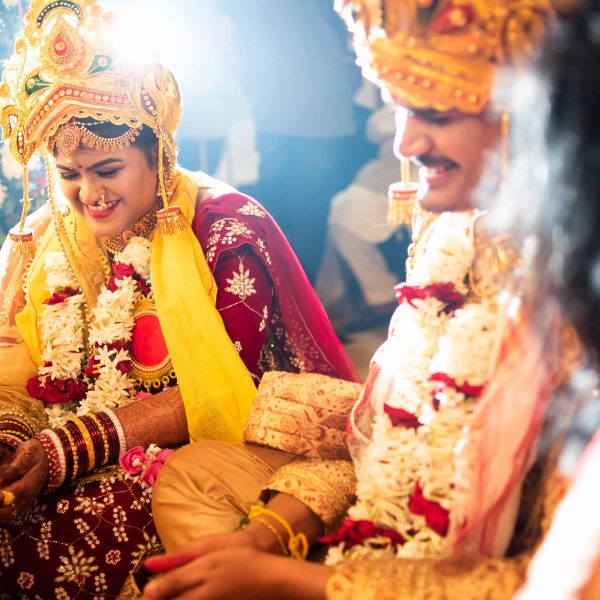 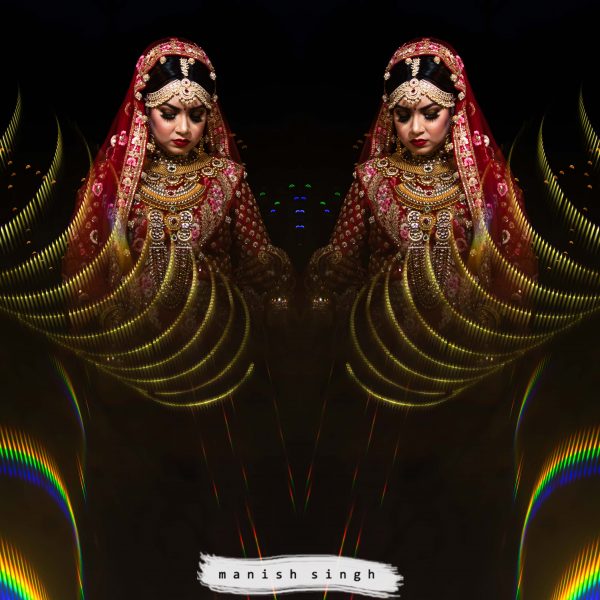 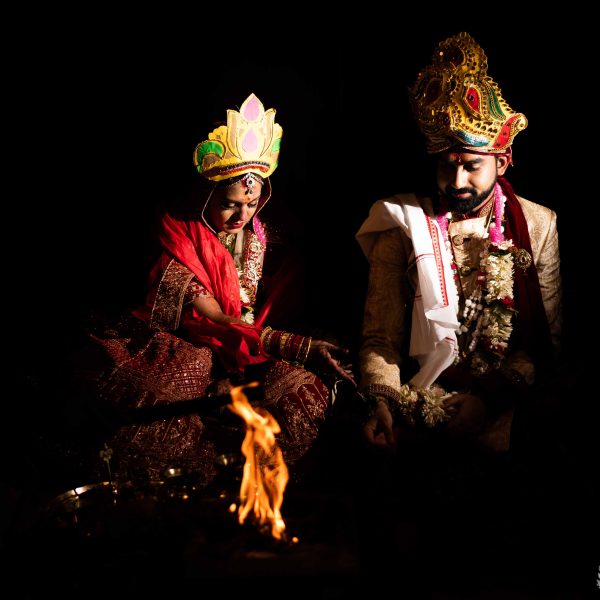 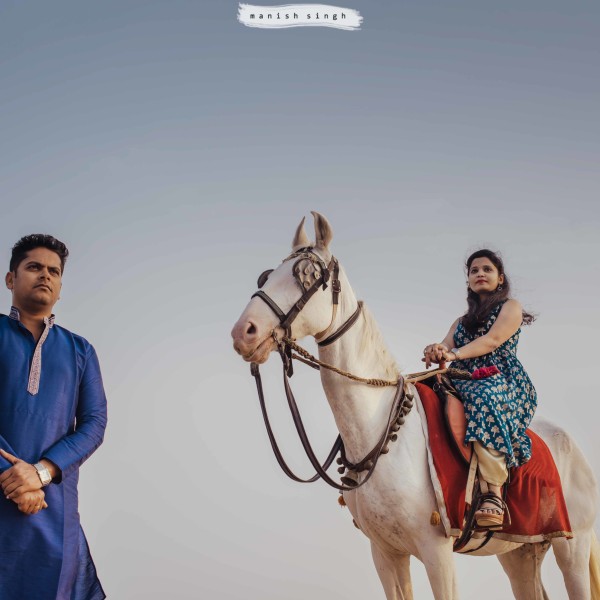